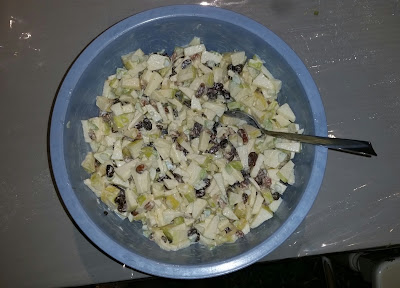 You will need:
7-10 Yellow Delicious apples, unpeeled
1 cup raisins (or more)
1/2-1 cup med pecan pieces
2 stalks (or ribs? What do you call it?) celery
1 cup mayonnaise

Dice the apples and finely dice the celery. Add the raisins, pecans and mayo. Serve immediately or within a couple of hours if you like chewy raisins. If you don't mind squishy raisins serve anytime, within a day. (My hubby does not like squishy raisins!)

I don't have a written recipe and usually just dump things together so if you find these proportions are not to your liking, adjust them! I figure on at least one apple per person and then some because our family loves this salad. And some of us don't mind, and in fact, really like, leftovers.

So you don't like mayo? Maybe you will. I never cared for mayo in apple salad and was shocked when informed that it is the sole dressing in this delicious salad.

The weekly menu begins on a Wednesday. That way I can go shopping midweek. It's probably just a mind thing but it helps me.

We do eat lunch but it's normally leftovers. I try to make enough in the evening to have some for the next day.

On my planning sheet there is one more row of boxes on the right where I fill in any activities that are planned.

If you have questions about how this menu can be sugar free and wheat free, I am happy to answer.

Amanda from The Fundamental Home has helped me tremendously in knowing how to shop frugally. Maybe it will help you too?

This verse caught my attention. The Lord's Prayer that nearly everyone recites says, Give us this day our daily bread. (Matthew 6:11)

This one was different.

Day by day, it said.

Do you, like me, look at the future instead of today? Tomorrow? Next week? Next month? Next year?

This week I was encouraged, as day by day the Lord gave strength for what seemed to be impossibilities.

I shared with my church sisters on Tuesday how I was failing to find the grace of God real in my situation. I want to think I would be strong in the face of persecution but I was not finding God in my life now.

The response was encouraging as they prayed for me in the moment. Even more than that they assured me of their prayers as I went on with life.

I hadn't wanted to attend the monthly Sister's sewing day. But having a food assignment forced me to go. That was when I shared my need and just spending the day there, sewing for the needy was refreshing. Getting my mind off myself.

Then different ones shared encouraging verses or devotionals with me throughout the week along with repeated reminders of their prayers.

My own devotionals were speaking to my heart, telling me to relax in God's control, being anxious for nothing.

Friday as I drove the boys to school for P.E., the rain was coming down but in the distance we could see sunshine. Then we drove out of the rain and almost into a rainbow. It intensified in color and became a full arch and even began to repeat itself before fading away. 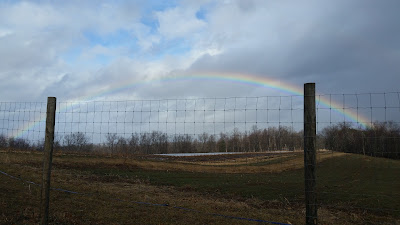 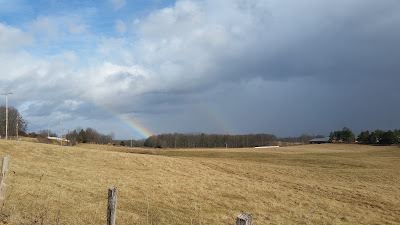 It felt like Almighty God was giving me a big hug. He was so near and real in all that beauty.

Another reminder of His care came in the form of honey and maple syrup. Stephen brought some home as a gift from his workplace.

My sister gave me a jug of honey for my birthday in December. When that was gone some friends gave us a quart of honey. That was nearly gone when this appeared. 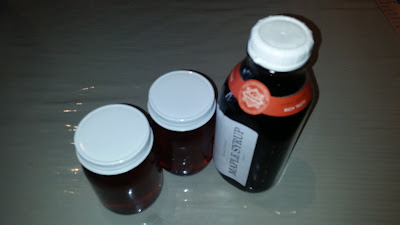 We use only natural sweeteners so this has been a huge blessing. If you use natural sweeteners, you know that they are not cheap. I've been working hard to whittle our budget down and it feels like God is blessing that effort.

My friend offered to make my food for the church dinner today and then she sent the leftovers home with me.

Another friend sent a pan of meatballs over yesterday.

♪♪"Day by day and with each passing moment,
Strength I find to meet my trials here...."♪♪

These are words from a song we sang last Sunday (the 7th) and this truth has become very real to me this past week.

The Lord blesses day by day; with grace... and with food.

My grace is sufficient for thee: for my strength is made perfect in weakness. 2 Corinthians 12:9

“The blood of Jesus is all powerful”. As Adel was forced from her home and abused by jihad soldiers, she repeatedly shouted these words. Her captors seemed surprised that she did not perish from their repeated attacks on her.

After many weeks of torture, labor and a forced marriage to her captor, she crumpled in despair and was ready to kill her unborn child. Her young daughter who was held captive with her, saw the knife pressed to her womb and forced her to stop.

Adel realized that her hatred of her captors had blocked the healing power of God's love. She confessed her hatred to God and begged forgiveness. Healing began to work in her soul.

Read to find out how she was rescued from her captors.

“Losing herself in the presence of Christ helped her immensely as she prayed for God to forgive her tormentors and give her strength for whatever came next.”

Long imprisonment nearly brought her to despair. But the Lord was faithful in showing her what was important and she became His witness in the prison.

“Although she didn't know what the future would hold, Purnima resolved to face it bravely. She recognized her weaknesses but refused to let them imprison her. She would rise to the challenge and leave the rest to God, just as Moses (her biblical hero) had done.”

What does God have in store for Purnima?

She was tempted by church and state to marry someone else but God helped her to stand firm. She was overjoyed when her husband was released.

Read about how they continue to face persecution and how God gives them deliverance.

Though these women face fear, anger, pain and great hardship, their commitment to Jesus is strong. He helps them through every situation. When we are weak, He is strong.

He has promised to never leave us nor forsake us. (Hebrews 1:5) He said to expect to suffer for His sake and promised to give words when they're needed. (Luke 21:12-15)

Reading about suffering is difficult for me. The confirmation that God's grace is sufficient through the suffering is what encourages me. 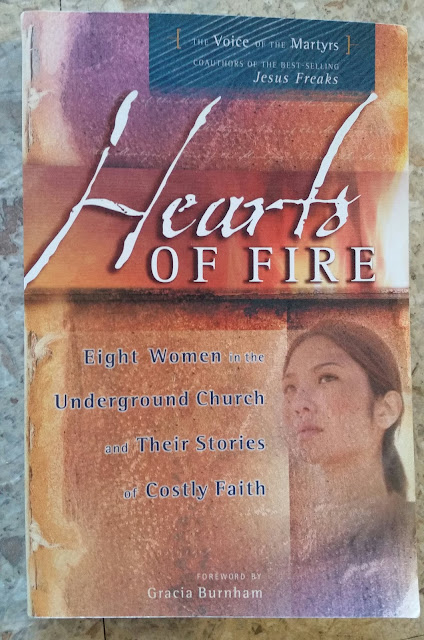 Posted by Marie Lapp at 5:35 PM No comments: